The chameleon is a member of the lizard family and is found mainly in Africa and Madagascar, though small numbers of them can also be seen in Europe and South Asia.

These solitary animals are famous for their bulging eyes and ability to change colour.

Chameleons have learned to adapt to a variety of different habitats and are commonly found in trees and shrubs in rainforests, savannahs, and mountainous forests.

There are also some species of chameleons that prefer lower ground, and they can be found foraging for food amongst dead leaves on the forest floor.

There are actually over 160 different species of chameleons and they can range in size from around 2.5 to 38 cm in length – the pygmy leaf chameleon, for example, is the smallest member of the chameleon family and is less than 3 cm long.

Chameleons have long, curled tails, and large eyes that have 360-degree vision. Vision is the chameleon’s most developed sense, and this enables it to hunt prey and spot predators very quickly.

Chameleons have very poor hearing and virtually no sense of smell.

The chameleon has a very long and sticky tongue that can shoot out of its mouth at high speed to capture prey.

The tongue can measure up to one and a half times the length of the chameleon, and this enables the creature to catch flies in mid-air. The tip of the tongue has an abrasive surface and is covered with sticky saliva.

The Panther Chameleon has striking and variable colours

A common misconception about chameleons is that they change colour in order to camouflage themselves. The colour change is actually triggered by emotion, temperature and light.

They are normally a greenish colour, but direct sunlight can darken their colour to dark grey or black.

Anger also causes a darkening of the skin, but fright and excitement produce pale shades. 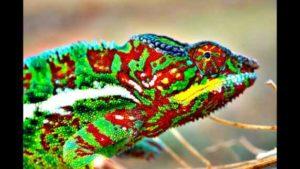 The colour change can occur within seconds and is produced by pigment cells that lie in layers under the chameleon’s outer skin.

Diet | Chameleons are definitely not active hunters and will sit perfectly still for hours whilst they wait for prey to appear. Their diet consists mainly of small insects, but larger chameleons will also eat small birds and other lizards.

Breeding | Most chameleons lay eggs, but some species actually give birth to live young. Young chameleons reach sexual maturity between 2 and 12 months – depending on the species. Eggs are buried under the soil and can take as long as 8 months to hatch.

Lifespan | Chameleons can live between 2 and 3 years in the wild, but this obviously depends on the species.

Predators | Chameleons have several predators that include birds, snakes and other lizards.

Interesting and amusing facts | Chameleons can go for long periods of time without eating. Unlike many other reptiles, chameleons can actually see in colour.

When chameleons get tired, they can often be seen sleeping upside down!