With any creature measuring just 30mm in length when adult this is always going to be a difficult process and it’s just the same with Mantella.

Here are a few basic guidelines but some species are easier to identify than others.

These are only guidelines and some species have more distinct differentiations, see the species pages for more details

Once you have established (with luck) that you have a pair of Mantella they will gradually become acclimatised to their new surroundings and their natural territorial instinct will begin to develop.

Males will show more marked territorial signs and will fight off any unwelcome visitors to their patch of log or rock by pushing and shoving them away.

A happy frog is a croaking one and once they begin send out their whistles, clocks and other noises you will know that they have settled in.

The purpose of the noises is both to warn other males that this spot is taken but it is also attractive to the females, the louder the noise the stronger the potential mate. 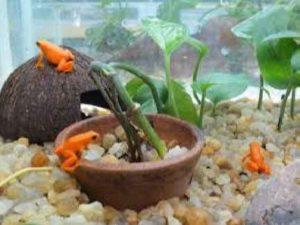 This will give you the best chance of breeding and also you’ll hear more of their calling sounds as they compete.

If your Mantella seem reluctant to croak then there may be a problem with their diet and or habitat. Make sure you give a wide variety of insects to ensure the correct and varied vitamin and mineral supply, also make sure that the thermostat is set correctly as they will be uncomfortable if kept too warm or too cold.

If all is well then pairing will begin with the male and female going through a courtship ritual which involves the male grasping hold of the female, sometimes for too long and the female will wriggle and writhe until he les go.

When two Mantella have paired the female will deposit her eggs in a damp and ‘secret’ place, typically this will be in a depression or hollow in moss, logs, under loose rocks or some similar damp place.

Mantella never lay eggs directly in water. She will lay between 18 and 120 eggs depending on species but all at this point still need fertilising.

The newly layed eggs will remain open for fertilisation for up to 2 days after which they will begin to shrivel if not fertilised.

The eggs will measure around 3mm in diameter and will contain a pale, buff coloured nucleus encased in a transparent jelly shell.

Once the eggs have been fertilised by one or more males they will begin to develop and the first signs that this has been successful will be the development of an embryo the first signs of which will be visible at around 24 hours.

If the eggs show no signs of fertilisation after 48 hours they should be removed to prevent the formation of mould.

Whilst in the first development stage the eggs are best left in place until the tadpoles are almost ready to hatch, this can take up to 6 days and during this time they should be kept very damp by misting them regularly to keep the shell soft.

Before the eggs hatch they should be removed and placed in to a small tank containing shallow water, do not attempt to remove them from any substrate sticking to them or you will kill the eggs.

In this case a ‘raft’ of moss has been placed in 2 inches of water to allow the emerging tadpoles access to water as soon as they break free from their egg.

If the egg shell becomes hard and tough the tiny tadpoles will not be able to break free.

If the eggs have been layed on a rock or log then the whole thing should be removed and given the same treatment, if you try to remove them manually from the rock etc then you can expect to break and kill some of the developing eggs and tadpoles.

The newly hatched tadpoles will need to be kept in water at a fairly constant temperature of 70°F (depending on species) to ensure even growth.

The water itself should be fresh tap water which should be boiled the day before using.

Every 3 days 10 – 20% of the water should be replaced to prevent the build up of waste, again used prepared water.

The nursery tank should have nothing in the bottom to start with as small pebbles can trap small tadpoles.

The water will need aerating but an air stone will be too violent so you should use some aquatic plants.

The water level should now be increased to around 6 inches.

Mantella tadpoles are herbivores and will begin feeding on the algae that will eventually begin to grow on the tank walls and surface of plants but until this occurs they will require feeding with fish food such as flakes, trout pellets and small pieces of lettuce should all be added to the water, you may need to weigh down lettuce with a smooth pebble.

Tadpoles are occasionally available for sale to subscribed members of Faunology

Mantella are slow growing and at 7 weeks you can introduce some fine aquarium gravel over the bottom of the tank.

Remove all the tadpoles in to a small holding tank and thoroughly clean the tank.

Start with fresh prepared water and this time the depth should be at least 7 inches. Add a 2 inch layer of gravel to the base and a good few aquatic plants.

These are Golden Mantella devouring a lettuce leaf (7 weeks old)

You can expect to see the first signs of hind legs at between 2 weeks and 26 weeks depending on the species, the cooler growing highland species tend to be slower to develop as they have a lower metabolic rate than the warmer living lowland species.

Front legs will begin developing between 6 and 35 weeks. During this period they will retain their tails which will begin being absorbed at 7 weeks to 35 weeks.

This is the time that the froglets will want to crawl out of the water on to land.

With Golden Mantella the first signs of back legs begins at around 11 weeks after hatching.

The Golden Mantella tadpoles are fairly slow growing and eventually reach a maximum size of around 20mm.

Once the tadpoles have fully developed rear legs and their front legs are beginning to appear it is time to set up the nursery tank.

Tadpoles which are ready to emerge from the water will hang around any floating plants near the surface.

Once the froglets are seen emerging on to the plants they should be removed and placed in to small jars filled with damp sphagnum moss which should be kept at around 70°F until full metamorphosis is compete which can be between 8 weeks and 12 months, again depending on species.

You could opt to go for a small community tank to take all your froglets. This should be kept simple and a 3 inch layer of orchid bark topped with a layer of live moss will do.

Place a shallow (1 inch max) dish in the tank, this is for putting almost emerged tadpoles in for them to make their final transition between tadpole and froglet.

Only move tadpoles with 4 fully formed legs in to the water bowl, those with no front legs will die if you move them too early.

You will have to watch them closely.

At this stage they will begin eating the tiniest of insects and these include small greenflies and springtails, other insects will be too large for the tiny frogs to cope with and you should be prepared for a high mortality rate, this can be as high as 70%.

The first signs of colouration will begin at around 10 weeks and full maturity is typically achieved at 12 months.