Bearded dragon behavior has been carefully and thoroughly studied for many years.

They have been carefully observed to find out how they will react to certain situations to learn more as well as to understand them better.

As of now, there are 73 different behavioral patterns observed and confirmed and included in these behaviors are social, sleeping/resting, thermoregulatory, territorial, and other general behaviors.

Some behaviors are only seen when they are alone and some dragons only show these behaviors when they see another kind in their marked territory.

When bearded dragons are alone, they perform behaviors that can be easily explained.

But there are also some actions that are really hard to understand.

For example, whenever you see your pet scratching vigorously or pacing back and forth against the glass wall, this may mean that your pet just wants to be taken out and handled or there is something inside their enclosure that irritates or stresses them out.

Bearded dragons are gentle by nature and they rarely show signs of anger or aggression to humans.

This is one of the main reasons why more and more people are becoming interested in raising bearded dragons in their home.

On top of that, they love the accompaniment of humans and they loved to be touched gently and taken care of.

Although they enjoy the companionship of humans, these dragons tend to be very aggressive towards each other especially with the male species.

These behaviors can be observed because when another kind enter one’s marked territory, they warn each other by showing some signs of power and dominance over their land by moving their heads up and down rapidly.

This behavior is called “Head Bobbing”. Also, the act of puffing out their throats or called “Bearding” can be observed.

Sometimes, males do this as a mating display but it is more observed when they try to maintain or defend a territory.

This is because bearded dragons are territorial reptiles and they always keep watch on their territories.

This happens especially if two dragons are housed in one location and they are of the male breed.

These dragons form fighting poses by displaying their beards, circling, and tail biting. 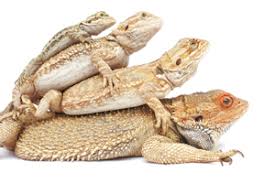 Female and young dragons also have their own territories.

Whenever they come in contact with male dragons, female and juvenile dragons adopt a submissive pose.

They position by lifting an arm and waving it in a circular 360˚motion.

This is done as a sign of respect or submission towards a threat or willingness to mate with males (in females).

When housing two or more dragons in one enclosure, you may see them basking together and climbing on top of the other dragon.

Watching them basking together seems like an act of friendship but for them, it is not. “Piling up” is an act of dominance from one dragon to another.

The bottom dragon receives less UVB than the dragon on top of it and we know that if dragons does not receive enough UVB, it can greatly affect their health.

These are just some of the behavioral patterns that bearded dragons may show you.

It is important for you to understand the actions that they might present to you and cater their needs so that your dragon will maintain its optimum health and reciprocate the love and care that you show to them.

It is not alarming if you can see your bearded dragon pet sheds its skin.

Theirs is nothing to worry about this. It is a process called Ecdysis.

Most of the animals in the reptile world experience this natural process which a part of their normal life cycle.

It is hard to understand the behaviors that bearded dragons show especially if you don’t know him/her well yet.

Sometimes, your pet may get irritate by you for not giving them what they need and in turn builds anger and hostility towards you.