But there are actually 8 types of bearded dragons classified and recognized scientifically (although 2 species are often referred to as subspecies).

These reptiles belong to the Order Squamata, Suborder Sauria/Lacertilia, Family Agamidae and the Genus Pogona—basically they are part of the lizard family.

They are commonly found in the Australian continent—crawling in the dry grounds of the deserts or climbing trees in the woodlands of the continent.

The discovery of these species has begun in the early 1800s but not much has been known about them until the recent years.

These lizards were given the common name of “bearded dragon” not because they have real beards (ones made of hair); but their name is attributed to the scaly pouch in their throat that distends and looks like a beard when they try to ward off predators or enemies.

Although belonging to the same family and genus, the 8 bearded dragon species have their own distinct characteristics that set them out from each other.

And you and I will look into these differences below:

This type of bearded dragon was the first-ever discovered specie of their genus– discovered by a scientist named Cuvier in 1829.

They are the biggest and the heaviest type among the 8 varieties of bearded dragons.

The term “barbata” is a latin word for beard, this name was given to this particular specie because its distensible throat is lined with black spikes that closely resembles a real beard.

They are commonly found in the eastern part of Australia perching on low-lying branches, sumps and rocks.

Discovered in 1919, this bearded dragon specie is normally seen in the western territory of Australia; although it is not unusual to see a Pogona minor on the northern portions of the continent.

It bears such name because compared to others; it is a relatively smaller dragon and can grow only up to 10 inches long.

Discovered by Ernst Ahl in 1926, this is by far the most commonly domesticated bearded dragon. This specie is widely distributed all throughout Central Australia.

It thrives well on a wide range of habitats—from arid woodlands and deserts to seasonally wet coastal forests and scrublands.

A lot of care tips and guidelines regarding bearded dragons are intended for this particular specie, except when specified otherwise.

However, this type of bearded dragon is considerably bigger than the specie that has been discovered by Sternfeld in 1919.

Western beardies can grow to reach up to 20 inches and are among the biggest bearded dragon species.

It resides in a vast range of surroundings in the Western part of Australia—it can be seen in crawling on coastal sand dunes and as well as climbing trees in the forested areas.

The main difference of this bearded dragon from all the others is the size of its scales (thus its name).

But other than that, this dragon also has fewer spikes on its throat and back than most other bearded dragons.

This specie can only be found within Australia and mainly lives within the Drysdale River National Park and other areas nearby.

This is the second specie that is classified as a sub-specie of Pogona minor by some scientists.

They are the smallest bearded dragons, capable of growing only up to 8 inches maximum. Its large conical head spikes also set them out from other dragons.

Their territorial range extends from the lower Northern Territory to Western Australia.

A bearded dragon specie that is said to have the smallest geographical range.

These dragons mainly reside only within South central and Southwest of Australia principally the Nullarbor Plain.

It is easily distinguished by large white stripes along its back and pronounced spines on its side.

The most distinct among all bearded dragons. Why? Because it has practically no “beard.” These “clean-shaven” dragons inhabit most of Queensland and parts of the Northern territory of Australia.

A Citrus bearded dragon is an elegant kind of reptile dragon. It becomes more adult when it reaches 2-3 years old that still maintains a good positioning condition.
These kinds of bearded dragons have a proportioned arms, legs and tail structure. 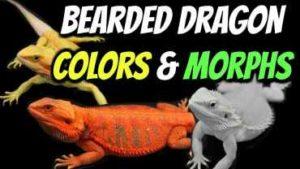 We have our own choices when it comes in making bearded dragons as our pet. A leatherback bearded dragon is an amazing option if we are looking for a pet with soft scales.
Leatherback is actually a morph, it has minimal scales on its back and touching it makes you touching leather.
The back of this bearded dragon can truly be appreciated.