In common with most frogs it is the male that does the singing, in reed frogs, this is usually quite a shrill click, chirp, or whistle.

This is a male Argus Reed frog and as you can see his throat area is puffed out and acts as a sort of amplifier for his click-click call.

In order to be successful at breeding these little frogs, you will usually need to get at least 6 individuals which should include at least two males.

It’s best to buy them all at one go if they are wild-collected as this will mean they are likely to be from the same area.

The downside to this is that the collectors out in Africa only hear the males so these tend to be more collected than females which are usually silent.

The frog’s will (depending on species) either deposit their eggs in the water or on leaves above it.

You should remove them after 2 days or when development is seen.

Tiny white tadpoles can be seen here developing in the jelly egg covering.

Reed frogs eggs and tadpoles need to be kept at the same temperature as the adults, your tank you will need some form of heating to raise the temperature to around 24C – 26C during the day and 20C – 22C at night.

The quality of water used will affect your success rate to some extent. Water drawn from the kitchen tap is fine but it must be allowed to stand for at least 24 hours before use to get rid of chlorine which can kill the eggs and tadpoles.

Use an air stone as illustrated here to increase the available oxygen in the water. You MUST NOT use this whilst the newly hatched tadpoles are in the water as the vibration can kill them very quickly. 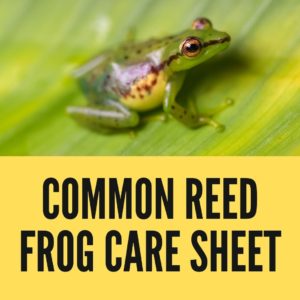 You will need to change the water in the tank to keep it oxygenated, follow the same method as above to initially charge the water with oxygen before replacing 1/3 of the water volume every 3 days or so.

Failure to do this will mean the tiny tadpoles can die due to lack of oxygen.

The bottom of the egg tank should not have any substrate or pebbles in it to start with as the tiny hatchlings can get trapped under seemingly tiny particles.

The tadpoles are generally herbivorous and will eat the microalgae that grow on the walls of the tank, they should also be fed on a good quality fish food flake from now on, give them one pinch per day.

The tiny young grow quickly and within two weeks they will have grown enough to introduce some aquarium gravel into the tank at the next water change.

Make sure the gravel is very well washed to remove any dust from it before putting it into the tank.

At the time of adding the gravel, it is best to remove all the tadpoles and put them in a small holding tank, this will allow you to thoroughly clean the tank out before adding the substrate.

Add the gravel to the tank to a depth of around 1 inch then add the water to a depth of at least 7 inches, you should add several aquatic plants to help oxygenate the water.

Test the temperature and if it is the same as the holding tank you can gently pour the tadpoles back in.

After around 10 weeks the first signs of metamorphosis should show with the rear legs. This is the first indication that something rather special is about to occur.

You should begin getting ready another tank to hold the new baby frogs!

The rear legs always develop first followed (usually within a week or so) by the front pair.

You should lower the water level now to be no more than 4 inches deep and place a smooth (not sharp) stone or large pebble in the tank which breaks the surface of the water, this will allow the froglets their first taste of land life.

Finally, something that resembles a frog, all be it with a tail! Full metamorphosis is now imminent and your other tank should be ready.

Failure to closely watch for the first signs that the frog wants to leave the water will result in it drowning as it is now an air breather.

The second tank should have 2 inches of damp sphagnum moss in the bottom together with a scooped-out depression in the center.

Fill the tank with water to allow the depression to at least partially fills with water.

This froglet has crawled onto the rock with has been placed in the tank to form an island.

As it is now showing interest to get out of the water it will be placed in the other tank.

Gently remove the froglet and place it in the water-filled depression, it will then be able to get out of the water easily.

Repeat this process with the frogs that are seen to want to get out of the water.

The new baby Reed Frog will now grow quickly and should be fed on fruit flies and micro crickets for at least a further 8 weeks, the food should be dusted with a good quality vitamin supplement.

From this point on you can treat them the same as the adults.