Unique in the animal world, amphibians have been around longer than mammals, reptiles, or birds, and are suited to life both on land and in the water.

Introducing the Amphibians to You

Amphibians are not reptiles

Like reptiles, amphibians are ectothermic, meaning their body temperature is dictated by the surrounding environment.

This means they need specific temperature conditions in captivity to function normally.
In nature amphibians often hibernate when it becomes cold, or become dormant if it is too warm but in captivity they can remain active all year round.
Virtually all amphibians are predatory and whilst most are insectivores, some will eat small mammals, fish, chicks, or other amphibians.
Unlike insects and spiders, amphibians are vertebrates and have a full skeleton and backbone.

Amphibians have a unique life cycle where they exhibit a larval and adult form. Adults lay jelly-like eggs, usually in a body of water, but in some cases on leaves or even more bizarrely carried under the skin of adults.

The eggs hatch into tadpoles, often in the hundreds or thousands, and live a fully aquatic life before growing limbs and finally turning into a mini adult form.

Much of this process is dictated by chemicals in the environment – sometimes a lack of specific chemical triggers can produce unusual effects such as giant tadpoles which continue to grow rather than change into adults.

The skin of amphibians is far more permeable than other animals, meaning that a certain amount of water can pass through the skin membrane.

Two side effects of this are that amphibians have to remain moist to prevent drying out, and they are far more sensitive to chemicals in their surroundings which can be easily absorbed into the body. 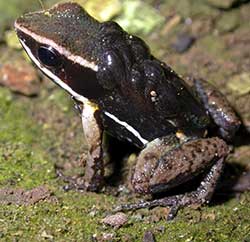 This male poison frog is carrying its tadpoles on its back

To help create a barrier, amphibians produce a protective layer of mucus which covers their skin and is regularly replaced.

As the old mucus is sloughed away it takes with it harmful bacteria, disease agents, and pollutants. The mucus layer is also used to prevent water loss or evaporation and can even harden, forming a protective cocoon, until the environment becomes wet again.

Whilst mucus is used as a barrier against disease drying, it does little to stop water being absorbed through the skin.Because of this water absorption it is essential that any water in a captive environment is kept as clean as possible, or pollutants will enter the body and cause health problems.

As well as water, amphibian skin can also take in oxygen, and amphibians actually ‘drink’ and ‘breathe’ partly through their skin membranes.

Because of the various qualities of amphibian skin, and also the toxicity of some species, it is essential that any captive specimens are handled very carefully and with the needs of the species in mind, both for the protection of the animal and handler.

Whilst amphibians are not the quickest, loudest, scariest, or strongest creatures in the animal world, they do have some unique tricks to stop themselves being eaten by bigger predators.

The most obvious of these is a warning system of strong colours and markings which in some frogs rivals the colors of tropical reef fish.A brightly colored animal is a warning to others which says ‘don’t eat me, I am poisonous’. As well as bright colors, many amphibians produce skin secretions which are noxious and also indicate a poisonous nature.

Of course, fakery (as opposed to imitation) never works on its own and most amphibians which say they are poisonous, are really poisonous.

It is said that the arrow frog is the most poisonous frog in the world and one frog has enough toxin to kill up to twenty people.

Most people are aware of frogs and toads, but what other common amphibians are there? Depending on where you live, you may have also seen newts, which are common in many ponds, pools, and waterways around the world.

Newts are part of the salamander group of amphibians and both newts and salamanders are often bred and sold for the pet trade.

Whilst most popular captive species of frogs and toads tend to either live in or out of water, salamanders will prefer an environment with both habitats, which makes for some interesting vivarium design challenges. 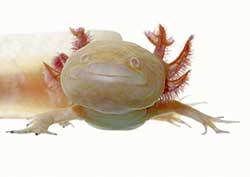 The Axolotl has a very unique look. This is the popular albino strain
The axolotl is also popular and is a uniquely bizarre creature, no doubt one of the reasons for its popularity, the axolotl is actually a salamander that never grows up and instead continues to grow in a fully aquatic larval form.

These unusual creatures are quite easy to care for and certainly generate some interest in those who have never seen one before.Caecilians are another type of amphibian, but are rarely seen in the pet trade.

Caecilians look like small, slimy snakes, or giant earthworms and can range from a few inches to 2-3 feet.

As these creatures are burrowers they tend to try and hide whenever kept in captivity and whilst interesting, they do not make great pets.

Whether you go for one of the many frog and toad species, salamanders, newts, or axolotl’s, or even a combination, amphibians are interesting creatures and creating a fully planted vivarium habitat is a worthwhile and rewarding challenge