Want to learn the simplest method of feeding your snake mice, rat, or meat?

You’re at the right place.

Since snakes vary a great deal in their size and habitat type their natural food source also varies, and hence in captivity the correct food for your snake depends on what type of snake you have.

Smaller species generally feed on insects and worms, which can be readily bought from reptile suppliers.

Some mid-sized snakes feed on small frogs, fish, and baby mice whilst larger snakes may feed on rodents and chicks.

Ensuring your snake feeds properly means selecting the right foods and feeding at the right frequency in an environment in which the snake feels safe and secure.

How often to feed your snake depends on what species you have, its age, and its size, so you will need to look at your individual species requirements.

In general, snakes under a year old need feeding every 5-6 days, snakes 1-3 years old can be fed every 10 days and older snakes over 3 years will only need feeding once every two weeks.

While some snakes feed all year round, many from temperate regions naturally hibernate or become dormant at certain times of year and will stop feeding.

Whilst temperatures in captivity may not reflect the changing seasons, other triggers such as day length, or just biological clocks, may bring on a fasting period.

Depending on your snake species, a fast may last a few weeks or several months.

Not all snakes need large food items like mice, some are insect eaters

Whilst snakes have the amazing ability to consume items wider than themselves, they have no need to eat such large items and are more likely to regurgitate large foods if stressed, or cause undue strain on digestive systems.

Generally, any food items should be no wider than 1.5 times the width of the snakes body, and ideally closer to the body width. 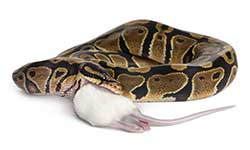 If you enjoy watching your snake hunt, catch, and slowly swallow a live rat or mouse while it is still kicking then you have little regard for animal welfare and are probably not the type of person who is responsible enough to care for an animal of any sort.

Having said this, snakes do best when fed a diet as close to nature as possible, and for some snake species this means small rodents, frogs, chicks, or even fish.

To reconcile the need for a proper diet and the responsibility of minimising suffering, we need to look at feeding humanely killed food items.

Whenever ‘live’ food is mentioned, the meaning is usually larger animals like mice, chicks, fish, or frogs. Of course crickets, worms and other insects or small invertebrates are also popular live foods for reptiles and snakes.

It is generally accepted that these organisms do not have the capacity, either physically or emotionally, to feel pain in the same way that larger animals do.

Because of this lack of pain, and also that they are farmed in sterile environments, they are considered a safe and humane source of food.

Ignoring the ethical aspect of feeding larger live foods, there are actually a number of practical reasons why pre-killed food is best for snake health.

Snakes have no problem in eating dead foods, and are known to do so in the wild, so a snake which is not eating may be a sign of a problem elsewhere – not with a lack of live food.

The biggest concern with live food like mice, rats, or even frogs, is that they can actually attack and damage the snake.

In the confines of an artificial environment a snake loses the element of surprise and faced with a probable attack, a rodent can do quite a bit of damage.

Second to this concern is one of health – live animals may contain any number of bacteria or disease pathogens which can cause serious illness to a captive snake.

Whilst the risk is much greater in collected foods than lab-bred live foods, the risk is still present.

Finally, from a practical point of view, it is far easier (and cheaper) to purchase and store frozen mice, chicks, and other foods than it is to feed live foods.

Whatever type of frozen food you use – fish, rodents, baby mice (often called pinkies) or rats – the important thing is to make sure they are fully defrosted before feeding.

If there are still frozen parts which are exposed to the insides of your snake, serious damage can be done to your snakes body.

The best method of defrosting is to just put the food item in a container and leave either in the fridge or somewhere away from direct sunlight or excess heat for 12 hours.

Some sources advise defrosting in hot water but there are arguments that this may reduce nutrient content or encourage harmful bacteria.

Never use a microwave to defrost food for snakes, as it can produce hot spots which can be equally damaging as frozen food.

Some fussy snakes may only eat food if it is warm, or ‘body temperature’, in which case a quick blast with a hairdryer or a few minutes under a lamp should warm up sufficiently.

And there you have it – a quick guide to feeding your snake animals.