So many have come to fall in love with These exotic pets, they are known very well amongst a large crowd of reptile owners .

They also stand out as one of the more emotional exotic pets. The bearded dragons as they are known, have a few different species in their family. 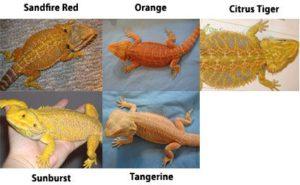 The distinction between them is the aim of this post. It is pertinent to note that bearded dragons come in a lot of different morphs these days and that is because most owners have a special way of breeding them.

That is taking the qualities they want and making it into one.

This they do by what is commonly called ‘cross breeding’ as it is known in the dog breeding.

But there are quite a few known types of bearded dragons species, some of them are listed and their descriptions are given in the course of this piece.

These are the coastal or eastern bearded dragons; they are also known as the Jew lizard. They are commonly found around the provinces of eastern Australia.

They feed mainly on insects, worms, and some small reptiles. They are omnivorous in nature and usually are grey or black in color.

This type is always very active during the day and get very territorial when other dragons come around.

These are a very rare speices amongst the bearded dragon family. They feed mainly on insects like the others, they are found in Australia, in the small coastal region of Australia. They have very faint scales and spikes than any other. They are also known the Kimberly bearded dragon.

They are the dwarf bearded dragon, located mostly in the western and central parts of Australia. They are usually in dark colors with very short legs and tails compared to the other bearded dragons. Like other dragons, they are omnivorous in nature. They love to dwell in rocky areas or deserts.

The central bearded dragons are usually found in the central areas of Australia, they love to dwell on dry shrubland, rocky deserts and forests. They are also known as the yellow headed dragons. When this set of dragon grow to full sexual maturity they start to feed more on vegetation than they do on insects.

The nullarbor bearded dragon as they are known, also known as the banded bearded dragons. They love to live around flat surfaces. They are very pronounced with a band and white stripes on their backs.

Found mainly in north-western Australia, reputable for conical spikes on its head, a rare attribute you won’t find in other species. Like all other bearded dragons they are omnivorous.

The western bearded dragon are located in the dry woods of Western Australia, of all the pogona minors they have the longest tail.

They can be very aggressive when angry.

With a range of other names, they are named Lawsons bearded dragon, they have a very light mixture of beige with dark stripes under their chin and often have the light colored stripe over their eyes.

They have a very good way of behavior and great communication skills.

Pogona are amazing creatures with a large family of relatives. Species other than the Pogona Vitticeps are rare as pets.

The others are actually rarely seen outside of Australia.