When you get your first Baby Bearded Dragon you may wonder, what’s a baby bearded dragon lifespan. How long will I be able to enjoy my new pet? A lot of factors may come into play.

The average reptile in captivity will usually live up to 20yrs. That all depends on what reptile and their size. Larger reptile like Iguanas, which can grow over 5 feet long. Also have a greater life span. One of the oldest ever recorded Iguanas lived to be 32!

Chameleons Which don’t usually grow longer than a foot tend to live less. The average life expectancy of a Chameleon is about 5-10yrs. Many don’t reach that age. On average a Chameleon will live up to 7 years. Which isn’t that bad.

The Pogona Lifespan is at about 5-8 years. Now, that’s on average. So we are counting the lifespan in the wild, which is about 3-4 years. Averaging that with a Captive lifespan of 7-10 years.

All those numbers seem to complicate the issue and don’t give a direct for the bearded dragon lifespan.

If you raised your bearded dragon from the time he/she was a Baby Beardie. Had the knowledge needed to properly take care of your dragon.

Kept a regulated Baby Bearded Dragon Habitat. Did all the right things as far as feeding and supplementation your beardie. 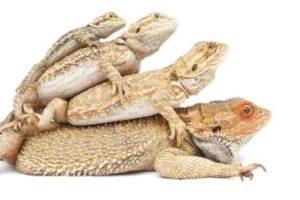 Than you can expect your dragon to reach a lifespan of about 10 years.

Heres a story about a Dragon owner that kept her beardie in good health and alive for almost 15 years. Guinness, rightfully named so, was a record-breaking Bearded dragon. Joiner Nik first set eyes on the future Guinness at a lizard fair. She bought baby Guinness home with a birth certificate stating date of birth July 26, 1997.

Why did her Pogona dragon have such a long life? According to Nik, it’s the daily teaspoon of Guinness Stout.