Found in Northern Mexio and Southern United States, Coachwhip Snakes are a non venomous snake species that are known for their long, thin bodies and for the fact that they can slither with fast speed.

A Quick Guide to Coachwhip Snakes

There are seven different versions of the Coachwhip Snake.

Eastern Coachwhip Snakes have brown or black heads. Their color goes from very dark near the head to very light near the tail. Sometimes they are lightly banded. They can be found in the Southeast United States.

Western Coachwhip Snakes are light brown, green or pink and red. They are found in the states of Colorado, Nebraska, Kansas and New Mexico. They can also be found in Northern Mexico.

Lined Coachwhip Snakes are light gray or tan. Each of the scales on the top half of their bodies has a single horizontal stripe through the center. They are found in southern New Mexico and Mexico.

Sonoran Coachwhip Snakes are bright pink with red or black bands. They can be found in southern Arizona and in Mexico.

Red Coachwhip Snakes have two different color variations. Some are red or pink with black or brown bands. Others are black with a lighter underside that is red and pink toward the snake’s posterior.

Baja California Coachwhips also have two different color variations. Some are gray or yellow with zigzagging lines. Others are dark gray with horizontal lines. They are found very far south in California and in Baja, California.

San Joaquin Coachwhips are yellow or olive green in color. They can be found in southern and eastern California.

NOte: Coachwhips can be aggressive if they have not been tamed. 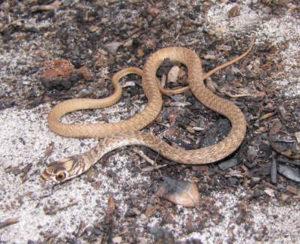 Coachwhip Snakes mate in April and May. The females lay clutches of 2-3 eggs. These eggs hatch in August or early September.

They can grow to be between three feet and eight and a half feet long.

They hibernate in winter about 1 foot under the ground.

They can slither up to eight miles an hour (a fast jog for a human) and can climb into trees and bushes.

Coachwhip Snakes are non venomous. Therefore, they are harmless to humans.

However, if you handle these snakes improperly, they will bite you quickly and repeatedly.

They can be very aggressive. They are extremely fast and have been known to give chase.

However, domesticated individuals which have been regularly handled are reported to be very well behaved.